Last week, we took a trip under the channel into Northern France to look at a rare French marble, Napoleon Lunel, for a prestigious project in Berkshire. To get a good impression of how the finished product would look, we needed to see a sufficiently large block of the marble. So we made the trip to the quarry and brought back some samples for the client. 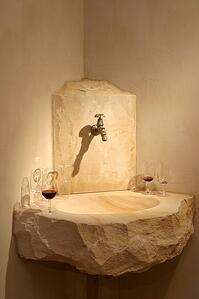 We were hunting for an unusual marble that could be used to make a kitchen worktop and a couple of basins similar to the one in the photo. The particular "wine sink" in the photo was carved from a French limestone from the Burgundy region but we have done others in a similar style made from other types of stone.

The basins are to be made to the designer's spec from solid blocks of marble. They are to have a rough chiselled outer finish to show that they were carved from a single piece of rock.

The kitchen worktop is to be made from a 50mm thick slab from the same stone with a chiselled edge that reflects the design of the basins.

One of our contacts in the French quarries knew where we could find a marble that was certainly rare but also had a great story with it: Napoleon Marble. 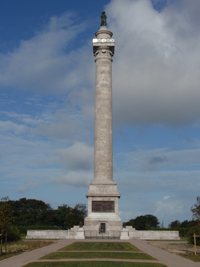 The Napoleon marble was first quarried to build the column on which Napoleon's statue stands.

The column was started in 1804 but not completed until 1841 when Napoleon's statue was finally installed on top. It was originally intended to celebrate the successful invasion of England and it was sited just outside Boulogne, the point of departure for the conquering French "Grande Armee".... a little prematurely, perhaps!

The column was damaged in the 2nd World War and again by lightning strikes in 1999 and 2002 but has now been fully restored with marble from the same quarry. It is open to the public and there is an internal staircase to give access to the platform on top of the column.

The quarry had stopped producing marble blocks and slabs many years ago but fortunately, there were enough blocks already quarried to carry out the repairs.

Crucially, for our project, there are just a few blocks left hidden away.

Our extensive network of experts around Europe allows us to search out hidden gems such as the Napoleon Lunel marble and to bring them into the workshop to be turned into bespoke luxury items that are unique and can never be repeated.

Are you planning a project that requires a unique piece of stone? Are you are a designer or an architect who caters for discerning clients? Would you like to know more?

Please click below and see how we can help: