This year's most popular limestone

The most talked about limestone and marble.

At the recent busy Homebuilding and Renovating Show at Birmingham's NEC, we took a selection of limestone that showed the range of colours that is available from some of the best quarries Europe. It was interesting to see which type and colour of stone attracted the most attention.

We currently work with around 80 quarries in France and a further 30 or so around Portugal, Spain, Italy, Belgium and Germany. So, it is impossible to take samples from all the quarries to every exhibition. I struggled to decide which to take and which to leave behind in the warehouse. To help me choose in future, I decided to monitor what is most attractive to the show visitors.

With a range of European limestone and marble on display, we noted the style and colours that people were drawn to. We arranged the samples in order of dark to light on our small display stand and kept track of which side of the display attracted the most attention. 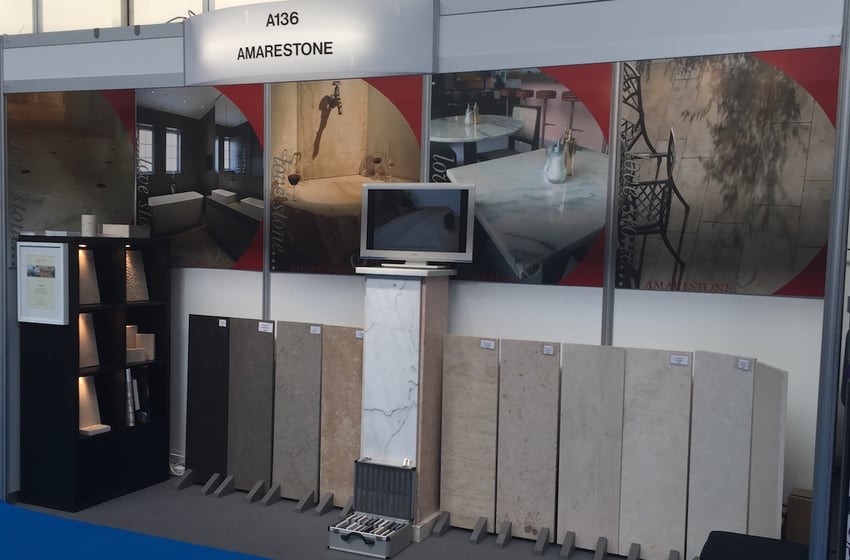 So which end of the display did visitors gravitate to? The light or the dark? Was it to the grey and blue or to the white and beige?

Which end had the most popular limestone colour?

Well, both ends, actually. There was a fairly even split between the two and a good number who went straight to the middle of the display for a closer look at the column of Portuguese marble. We have used this range Rosa Aurora marbles in several domestic bathrooms but also as table tops and bar tops in some busy London restaurants for well known chefs.

The grey/blue range appealed to the visitors who were looking for contemporary flooring both internally and externally to create the seamless inside/outside look. The limestones that particularly grabbed people's attention were the two Spanish limestones, Cenia Grey and the Grey Venezia (also known as Siera Elvira). As we explained to the visitors, any stone that is going to be used outside must have good frost resistance. This can be demonstrated in the test results that are given in the CE Certificate (a legal requirement for anyone who specifies flooring tiles since the legislation came into force in July 2013). Our Buxy Bleu French limestone is another great example of a blue/grey stone that is very tough and is suitable for high traffic areas.

The lighter grey limestone, Ataija Azul, (third from the left as you look at our stand) is a hard Portuguese limestone that works beautifully as internal flooring, particularly in the "brushed " finish.

The rest of our display was made up of French limestone from quarries in Burgundy and South West France. With over 80 quarries around France to choose from, our range of French stone is wider than most people could imagine. The Chamesson Coquillé with its bold fossils was the one that most people came forward to touch and feel. This is one of several limestones from the Chamesson quarry that we took to the show. The elegant Chamesson B2-B4 is excavated from the layer beneath the Coquillé and it takes many people by surprise that the different layers (or benches) in the quarry can produce such different looking stones. The Chamesson stone has an excellent pedigree and can be seen in many prestigious locations around the world including in London's Canary Wharf and private villas.

Overall, based on our experience at this show, it appears that grey/blue stone is just as popular as the beige/white stone but I did note that the people who looked at the grey end didn't generally cross over to lighter end - nor vice versa. For the time being, sales of the beige/white limestones still outweigh sales of the blue/grey stone but maybe that is about to change?

I wonder. Do people feel bold when they are looking at samples but then play "safe" when they make the decision to buy? It seems that way at the moment.

What's your preference? Let us know.

Whichever colours your prefer, if you would like some help choosing the right stone for your project, give me a call or email advice@amarestone.com. I always enjoy talking about stone and would love to hear from you.

Our brochure explains how Amarestone can help you choose the right type of stone and ensure a long, low-maintenance life for your stone.